Honey, honey, honey… and now everything is sticky!

This past week we (other half and I) have been busy with the honey harvest! The bees are really my husbands hobby, but I help out when I can. We have two hives at the back of the garden, behind the chickens. They are fascinating creatures to watch and generally placid as they are too busy going about their business collecting nectar and pollen. I say ‘mainly’ placid as I got stung on the face a few weeks ago though I was strimming the weeds around the hive without any bee suit on and Jim got stung multiple times last week when he was merging two hives together and they didn’t appreciate the move (he was only wearing a half length bee suit and so he got stung on the ankles – ow!). 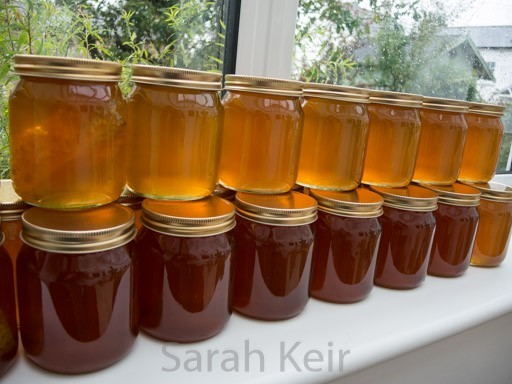 The honey harvest! The jars on the bottom look darker as there are other jars behind them.

But now it is time for us to get our first honey harvest. This is the third year we have had bees and only the first time we have got any honey from them. It takes a couple of years for the colony to be strong enough to harvest and the first colony died in its first winter. We had a fair amount of ‘fun’ with the bees this year, what with swarming several times. Part of the merging of hives was to get rid of a weak queen (in a humane way, she was euthanised) and then bring together to the two smaller hives so they stand a better chance of surviving the winter. Which meant we only got to harvest the other hive. 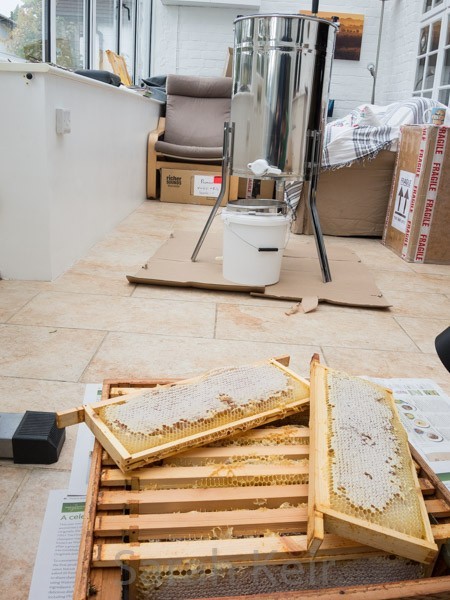 We turned the conservatory over to honey extraction as we could keep the cat out and minimise stickiness (to a degree!).

Keeping bees is not a cheap hobby and the cost of the honey nowhere near covers the real costs of producing it which is why real, locally produced honey is the price it is. But you can come and meet the bees if you like and at least see where they live. Very low food miles! This honey is very local, totally natural (no added sugar unlike some supermarket stuff) and is raw (supermarket stuff is pasteurised which kills off the good enzymes). I also have a couple of jars of capping for sale – these are full of natural wax, pollen and propolis so are really good for you, especially if you suffer from hayfever. I am very pleased with the harvest – 26 jars of 1lb (454g). Some of the jars also have chunks of comb in. 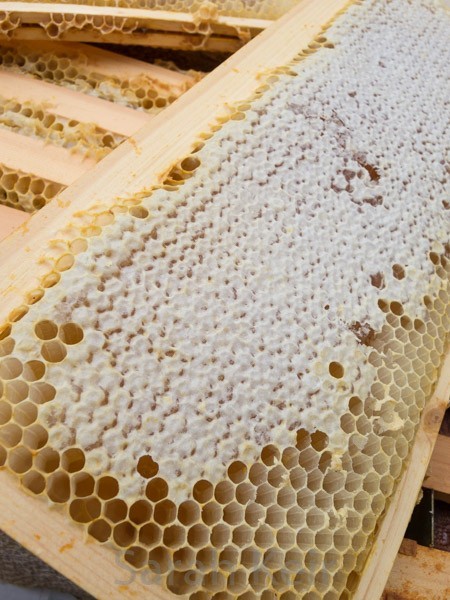 The capped honey waiting to be extracted from the comb.

Did you know that to produce one pound of honey, 2 million flowers need to be harvested? In its lifetime, one honey bee will only collect 1/12th of a teaspoon of honey! Wow, that is a lot of trips out and it is all very weather dependant; bees make great weather forecasters. In the middle of a summer, the hive will contain about 50,000 bees all under the care of one queen! And that 80% of our fruit, vegetable and seed production depends on the pollination of insects like bees! 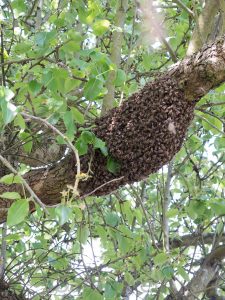 The swarm when it was in next door’s pear tree! 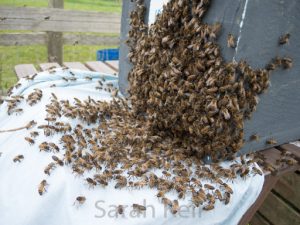 Putting the swarm in a temporary box as the second hive hadn’t arrived yet. 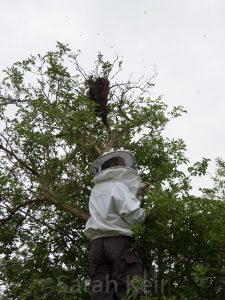 Jim up a ladder collecting the swarm the first time. 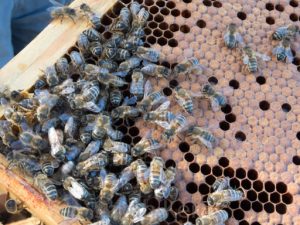 Can you see the queen? She is marked with white. 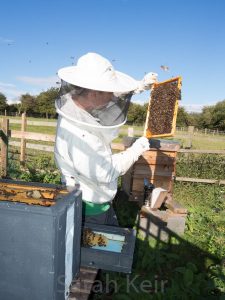 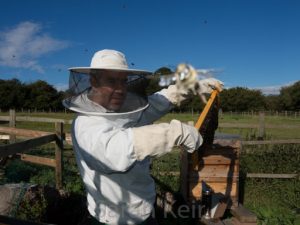 Watch out for the camera! 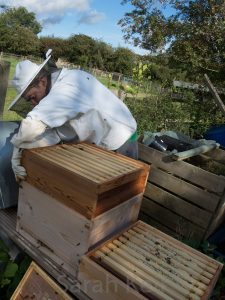 Removing the super full of honey! 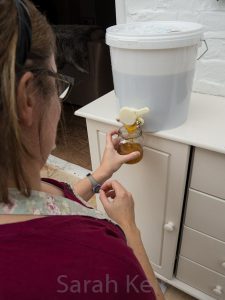 The honey ‘tap’ is called a honey gate and it makes a nice clean job of getting sticky honey into a jar with minimal stickiness! 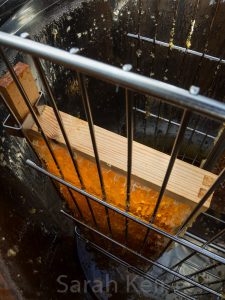 A frame of honey in the extractor – beautiful! 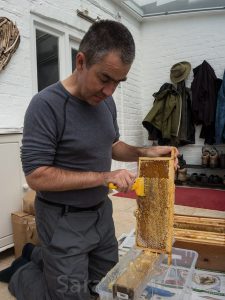 This process is called uncapping – removing the wax caps from the cells of honey so it can be extracted. 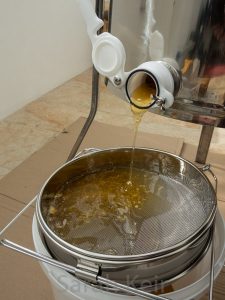 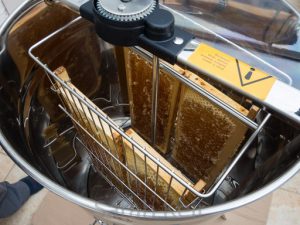 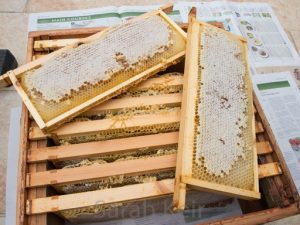 Frames waiting to be extracted – a nearly full super.