Stollen is a traditional German Christmas cake bread found all over the continent at this time of the year and making its way over to the UK. Rather than buying an over priced cake drenched in that awful sweet powder that is not sugar, I decided to give it a go making one myself especially as it would give me an excuse for trying out an enriched dough recipe. An enriched dough contains butter or eggs (this recipe has both) which means the action of the yeast is suppressed. Basically this recipe cannot be rushed as the yeast will take longer to rise so find a day when you are in all day and start early in the morning. Our house does not have heating during the day so to give the yeast some warmth in which to do its magic, I placed the covered bowl on a vivarium heat mat. This heat mat is essential for me to make bread as the house is fairly cool even in summer – it only cost about £10 from eBay (something like this). 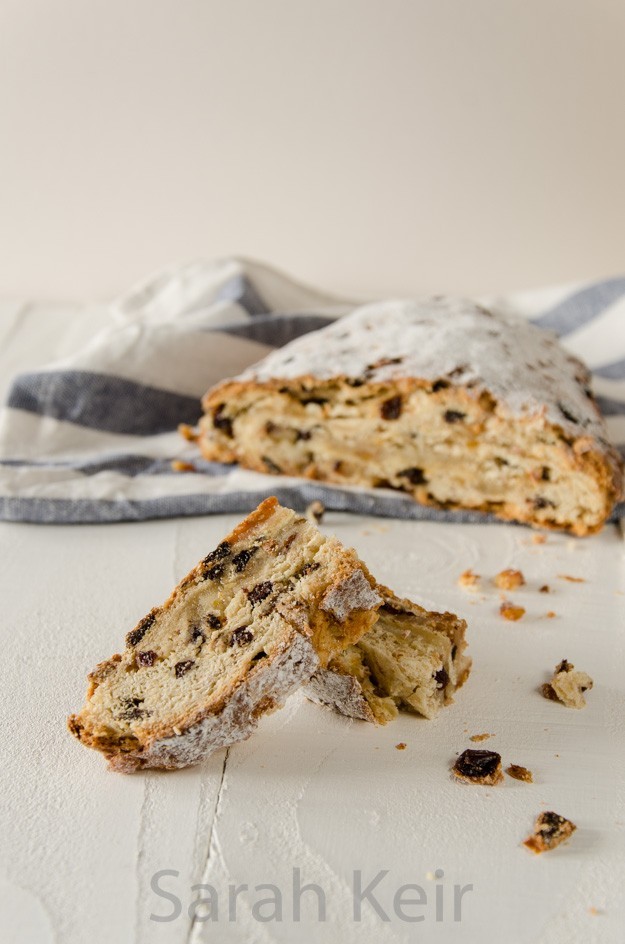 I am not sure if you would call stollen a yeasted cake or an enriched bread – they are the same thing I guess.  The bread part is sweet and almost cake like in taste and texture, the mixed fruits add interest to the texture and the spices just scream Christmas. I love the taste of marzipan so I cannot think of anything better than stollen but if you don’t like marzipan I suppose you could leave it out (you heathen). I think I left my stollen to prove too long the second time as it slumped in the middle. Has anyone else had this problem? I also made it as one huge stollen but it was a real monster and would probably do better as two smaller loaves. Stollen freezes well once baked so by having two loaves, you could have fresh stollen for the whole Christmas period! 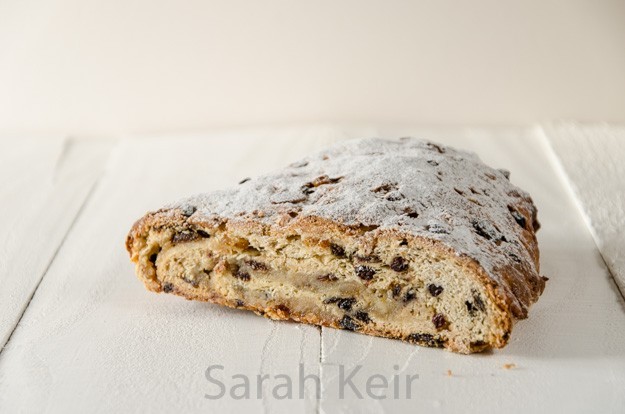 500g strong white bread flour
100g butter, melted
50g caster sugar
225ml warm milk
1/2 teaspoon vanilla extract
5g salt
10g fast action yeast (one and half packets of usual supermarket size)
an egg, beaten
For the filling
100g raisins
100g currants
100g mixed peel
50g flaked almonds or chopped blanched almonds
1/2 teaspoon ground cinnamon
6 green cardamons, seeds removed and crushed
25g butter, melted
200g marzipan
For the icing
25g butter, melted
icing sugar
In a large bowl put the flour and sugar. Add the yeast to one side of the bowl and the salt on the other. Add the melted butter, beaten egg, vanilla extract and most of the milk and using your hand, mix well together until comes together. Use the extra milk if the dough is dry; this dough starts off very sticky but will become shiny, smooth and elastic as it is kneaded. It needs kneaded for 10 minutes. When the dough is soft and elastic, place in a well floured bowl and cover with cling film.
Leave to rise somewhere warm to double in size – this may take a couple of hours.
In a clean bowl, mix together the filling ingredients except the butter and marzipan.
Once the dough has risen, knock back the dough in the bowl and then transfer the dough to the filling bowl. Mix the filling into the dough by kneading the dough from the outside of the bowl into the centre.
When all the filling is incorporated into the dough, turn the dough out onto a lightly floured surface and roll out to a rectangle (either one large one or two smaller ones). Sticking down the edge of the dough to the work surface nearest you and rolling away from the body is the easiest way of achieving this.
Roll out the marzipan to a rectangle that fits within the dough the dough rectangle. Brush the dough rectangle with the melted butter, lay over the marzipan and roll up the whole lot, making sure the marzipan is completely enclosed and the long edge and ends are well sealed (squidge with fingers). Place this rolled loaf or loaves onto a floured baking sheet, place inside a large plastic bag (I had to use a bin bag to get one big enough) and leave somewhere warm to prove. It needs to double in size again and when touched, the surface springs back.
Preheat the oven to 180 ºC/fan 160 ºC. Bake the loaf/loaves for 40 minutes to an hour depending on the size; they should be pale golden. When the loaf/loaves are removed from the oven,place on a wire rack, brush with the last lot of melted butter and dust liberally with icing sugar.
Once cool, wrap in paper or cling film to store. Keeps for 3 or 4 days. 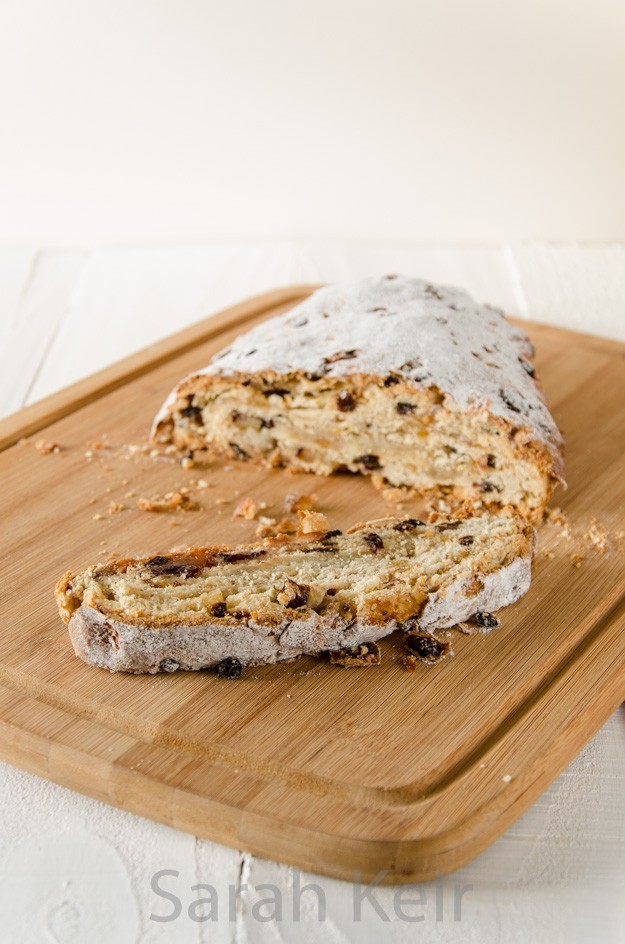